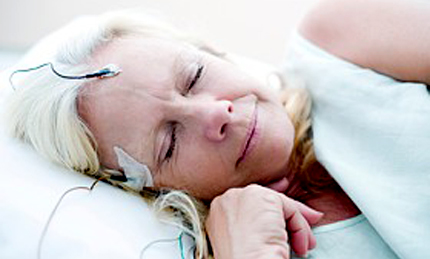 The neural basis of sleep and sleep disorders

The characteristic oscillations of the sleeping brain, spindles and slow waves, show trait-like, within-subject stability and a remarkable interindividual variability that correlates with functionally relevant measures such as memory performance and intelligence. Yet, the mechanisms underlying these interindividual differences are largely unknown. Spindles and slow waves are affected by the recent history of learning and neuronal activation, indicating sensitivity to changes in synaptic strength and thus to the connectivity of the neuronal network.

Because the structural backbone of this network is formed by white matter tracts, we hypothesized that individual differences in spindles and slow waves depend on the white matter microstructure across a distributed network. We recorded both diffusion-weighted magnetic resonance images and whole-night, high-density electroencephalography and investigated whether individual differences in sleep spindle and slow wave parameters were associated with diffusion tensor imaging metrics.

Individuals with higher spindle power had higher diffusivity along the fibre tracts in the forceps minor, the anterior corpus callosum, fascicles in the temporal lobe, and those within and surrounding the thalamus. Individuals with a steeper rising slope of the slow wave had higher axial diffusivity in the temporal fascicle and frontally located white matter tracts (forceps minor, anterior corpus callosum). These results indicate that the profiles of sleep oscillations reflect not only the dynamics of the neuronal network at the synaptic level, but also the localized microstructural properties of its structural backbone, the white matter tracts.