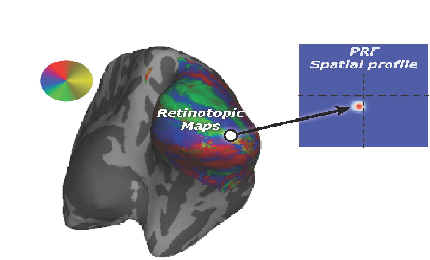 Every neuron in the visual system responds to visual stimulation of a restricted area of the retina: its retinotopic receptive field. In the cortex, the spatial preferences of visual neurons change slowly from one point on the cortical surface to the other, creating so-called retinotopic maps. There are more than 15 retinotopic maps in the visual system of the human brain (see the colored bands in the figure, which each represent a region in visual space), where each retinotopic map samples a half-field of visual space, and is responsible for the computation of visual attributes such as color, depth, motion etc.

With fMRI, we measure thousands of neurons in each voxel. Because neurons with similar receptive fields are close together on the retinotopic map, each population of neurons measured in a single fMRI voxel will have similar receptive fields. This means that it is possible to chart, for each voxel, its population receptive field, or pRF, i.e. the region of visual space that the voxel’s neural tissue analyses (see figure, right). We estimate these population receptive fields to thoroughly understand how the visual system encodes information. Recent studies using this novel encoding-model approach emphasize the flexibility of information encoding in the retinotopic maps, changing due to things such as attention, etc. Thus, they bring us closer to a low-level understanding of the neuronal underpinnings of cognitive phenomena.