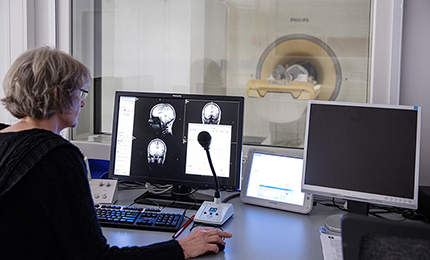 The efficacy of deep brain stimulation as a treatment for neurological disorders can be considerably improved by using Ultra-High Field Magnetic Resonance Imaging (UHF-MRI) instead of traditional 3T and 1.5T MRI. This experimental technique, which is yet to be approved by health authorities, should therefore be further investigated and refined. This is the view of a new paper co-authored by Spinoza Centre researcher Birte Forstmann and published in the latest edition of Trends in Biotechnology.

Deep brain stimulation (DBS) is a stereotaxic neurosurgical procedure for a number of neurological and neuropsychiatric disorders including Parkinson’s disease, essential tremor, Tourette’s syndrome, Obsessive Compulsive Disorder and chronic pain. The procedure, which is used for patients whose symptoms cannot be adequately controlled with medication, involves implanting a medical device that sends electrical impulses to specific targets in the brain (nuclei). Before insertion, magnetic resonance imaging (MRI) or computed tomography (CT) is used to identify and localise the exact target which receive corrective electrical impulses that aim to supress related symptoms.

Despite its documented success, DBS can sometimes fail to alleviate symptoms and is known to occasionally give rise to unwanted psychiatric side-effects. These side-effects are generally attributed to the suboptimal placement of the implant within the brain and have in recent years negatively influenced public perception of DBS as a treatment method.

In their paper, the authors argue that serious thought should be given to replacing 1.5 Tesla MRI and 3 Tesla MRI with UHF-MRI during the preoperative planning stage for DBS. ‘Though MR technology has advanced greatly over the past three decades, subcortical imaging has remained challenging because the target nuclei are barely represented in standardised anatomical diagrams. This is particularly problematic given that the majority of DBS targets are small and deeply situated subcortical nuclei which cannot be reliably nor reproducibly imaged with clinically utilised 1.5T and 3T MRI’, says Forstmann, lead author and group leader at the Netherlands Institute for Neuroscience.

Another drawback of 1.5T and 3T MRI, the authors argue, is that lower field strengths may produce scans that differ in quality and accuracy. As a result, the viability of the DBS target must be confirmed or modified with time-consuming and invasive intraoperative methods during the actual implantation of the DBS leads.

The authors believe these shortcomings can be overcome by applying patient-specific UHF-MRI which – due to its precision – produces highly accurate and specific images of the DBS target nuclei, which are further complemented by quantitative assessments of the nuclei’s suitability as a target. While this experimental technique is yet to be approved for use in neurosurgical targeting and requires a more advanced knowledge than is typical within the field of clinical radiology, it nonetheless offers a number of advantages, says Forstmann: ‘Ultra-high frequency imaging allows for more anatomically correct imaging that also takes into account the subtle individual differences in neuroanatomy that cannot be captured with lower field strengths. Such specialised sequencing would greatly aid pre-operative planning for DBS in Parkinson’s and other diseases like Tremor, Tourette’s and Epilepsy.’

In the specific case of Parkinson’s, UHF-MRI could be used to determine the structural and functional connectivity for subcomponents of targeted nuclei, Forstmann adds. ‘This will, for example, help to pinpoint the motor portion of the subthalamic nucleus (STN) for Parkinson’s patients, which would increase the efficacy of the treatment while simultaneously reducing the occurrence of psychiatric side-effects. What’s more, the high precision of UHF could eliminate intraoperative testing and permit surgeries to be performed under general anaesthesia which would maximise patient comfort and reduce the anxiety often reported by DBS patients.’