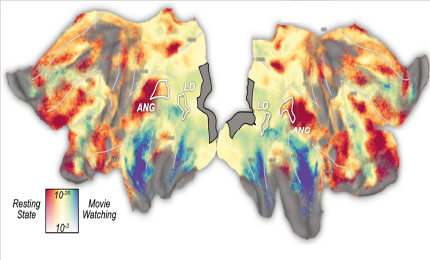 The human visual system is organized as a hierarchy of maps that share the topography of the retina. Known retinotopic maps have been identified using simple visual stimuli under strict fixation, conditions different from everyday vision which is active, dynamic, and complex. This means that it remains unknown how much of the brain is truly visually organized.

In a recent paper in PNAS, Tomas Knapen demonstrates widespread stable visual organization beyond the traditional visual system, in the default-mode network and hippocampus. Detailed topographic connectivity with primary visual cortex during movie-watching, resting-state, and retinotopic-mapping experiments reveal that visual–spatial representations throughout the brain are warped by cognitive state. These results indicate that visual–spatial organization is a fundamental coding principle that structures the communication between distant brain regions.